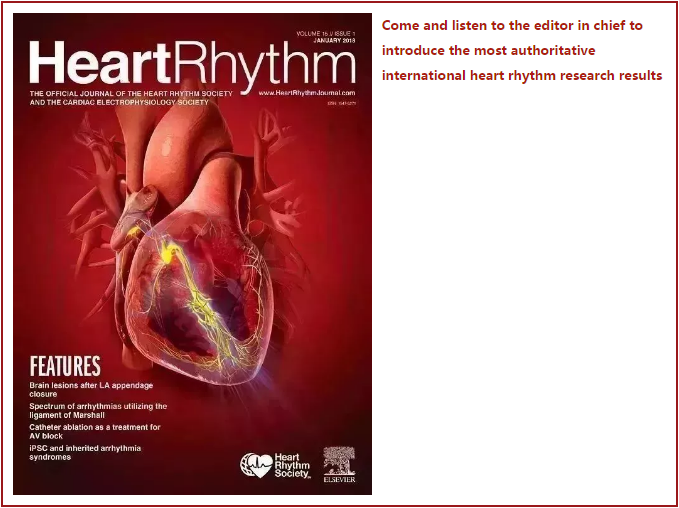 The Heart Rhythm Journal is entering its 17th year. In addition to being the official journal of the Heart Rhythm Society and the Cardiac Electrophysiology Society, as of this month the journal is also the official journal of the Pediatric & Congenital Electrophysiology Society. The journal maintained its lead in 2018 as the most cited arrhythmia-focused journal, with 14,412 total citations. The current impact factor is 5.225. I want to thank our authors, readers, editors, reviewers and staff members for their contributions to the journal.

The first article this month is “Effect of remote ischemic preconditioning on electrophysiological parameters in non-valvular paroxysmal atrial fibrillation: The RIPPAF Randomized Clinical Trial” by Kosiuk et al. The authors randomized 146 patients with paroxysmal AF to undergo either remote ischemic preconditioning (RIPC) by short episodes of forearm ischemia, or sham intervention. The results show that RIPC reduces the inducibility and sustainability of AF. RIPC has been used before in multiple other cardiovascular conditions, but the mechanisms remain unclear. Whether or not it can reduce AF burden outside the EP lab remains to be studied.

The next article is by Oh et al titled “Effect of the variability of blood pressure, glucose, total cholesterol, and body mass index on risk of atrial fibrillation in a healthy population”. The authors studied 7 million patients from the Korean National Health Insurance Corporation and measured the variability of glucose level, blood pressure, total cholesterol and BMI during each clinical visit over a 5-year follow up period. The results show that higher variability of these metabolic parameters is closely associated with the risk of new onset AF in those without cardiovascular comorbidities. These findings suggest that preclinical metabolic imbalance may play an important role in subsequent development of AF.

Next up is an article by Hutt et al, titled “Left atrial appendage closure device implantation in patients at very high risk for stroke”. The purpose of this study was to assess the role of the Watchman device in patients with CHA2DS2-VASc ≥5. They included 104 patients with successful Watchman device implantation. A majority of the patients had high bleeding risk. All but two were treated with anticoagulation for 45 days following Watchman implantation. All patients also received life-long aspirin, and some received dual antiplatelet therapy for 6 months. After one year of follow up, only 3 patients, or 2.8%, suffered a stroke. The estimated annual risk of stroke in patients with the characteristics of this cohort is approximately 12% off anticoagulation, and >4% on warfarin. These findings show that the left atrial appendage closure device may reduce the risk of stroke in this high risk population.

The next article is written by Noel et al, and is titled “Oversensing issues leading to device extraction: When subcutaneous implantable cardioverter-defibrillator reached a dead-end”. Subcutaneous implantable cardioverter-defibrillator, or S-ICD, implantations are rapidly expanding. This single-center study found that the S-ICD had to be explanted in 6 of 108 implanted patients (5.6%) because of refractory oversensing issues that included myopotential oversensing, P- or T-wave oversensing, rate- dependent left bundle branch block aberrancy during exercise with R-wave double counting, and R-wave amplitude decrease after ventricular tachycardia ablation leading to noise detection. Despite adequate preoperative screening, signal oversensing without an available corrective programming option remains a major concern of S-ICDs.

Next up is an article titled “Incidence of false-positive transmissions during remote rhythm monitoring with implantable loop recorders” by Afzal et al. During a 4-week study period, all consecutive remote transmissions in patients with implantable loop recorders implanted for atrial fibrillation surveillance, cryptogenic stroke, and syncope were reviewed. A total of 695 remote transmissions were adjudicated. The authors found that the false positive rate during remote monitoring was substantial, ranging from 46% to 86%, depending on the indication for implantation. Adjudication of these transmissions is required to avoid misdiagnosis and potential errors in clinical management.

Hakemi et al wrote the following paper titled “Quadripolar versus bipolar leads in cardiac resynchronization therapy: An analysis of the National Cardiovascular Data Registry”. The authors evaluated data on 176,000 procedures and analyzed the outcomes using Centers for Medicare & Medicaid Services claims data between 2010 and 2015, during which quadripolar lead was introduced to clinical practice. There was a reduction in CRT lead placement failure rates and a reduction in diaphragmatic stimulation rates. However, these improved procedural outcomes did not translate into any statistically significant difference in long-term clinical outcomes. Whether there is any mortality benefit of quadripolar versus bipolar leads in older patients undergoing CRT implantation remains unclear.

The following article is written by Joung et al, titled “Additional antitachycardia pacing programming strategies further reduce unnecessary implantable cardioverter- defibrillator shocks”. In patients from the Shock-Less study, the number of overall shocks were compared between patients programmed to no more than 3 ATP sequences in the VT zone and no more than 1 ATP sequence in the fast VT zone, versus patients programmed to receive additional ATP sequences in VT and fast VT zones. Over a mean follow-up period of 20 months, patients with additional ATP programming had a 39% reduction in the number of shocked VT episodes and a 44% reduction in the number of shocked fast VT episodes. These results show that programming more than the nominal number of ATP sequences is associated with a lower occurrence of ICD shocks in clinical practice. However, because the authors did not collect data on syncope, whether or not there is increased episodes of syncope is unclear.

The next article is titled “Oral geranylgeranylacetone treatment increases heat shock protein expression in human atrial tissue” written by van Marion et al. Geranylgeranylacetone (GGA) is a compound that upregulates heat shock proteins, which are important chaperones that regulate the maintenance of healthy protein quality control in the cell. The authors treated the patients with either placebo or GGA for 3 days, then harvested right and left atrial appendages during coronary bypass surgery. The results show that 3 days of GGA treatment is associated with higher heat shock protein expression levels in the atrial appendages. These findings pave the way for future studies using GGA to increase heat shock protein levels and treat cardiac diseases, such as postoperative AF.

De Almeida et al authored the next article titled “Human subpulmonary infundibulum has an endocardial network of specialized conducting cardiomyocytes”. The right ventricular outflow tract is the most common source of ventricular arrhythmias in nonstructural heart disease. The authors performed serial histological sections or microcomputed tomography of adult human hearts. They were able to track specialized conducting cardiomyocytes from the base of the anterior papillary muscle to the supraventricular crest and subpulmonary infundibulum. Transitional cells were also found at these sites. These specialized cardiomyocytes could be the source of arrhythmias that originate from the endocardium of the RV outflow tract.

Next up is an article titled “Enhanced arrhythmogenic potential induced by renal autonomic nerve stimulation: Role of renal artery catheter ablation” by Chinushi etal. The authors used a decapolar electrode catheter to perform electrical nerve stimulation of the proximal segments of the canine renal artery before and after RF ablation at the vein ostia. Before ablation, nerve stimulation increased blood pressure, heart rate and often induced ventricular arrhythmias. These effects were attenuated by ablation. These findings suggest that renal autonomic nerves are one of the therapeutic targets for suppression of frequent ventricular arrhythmias.

The next article is a contemporary review titled “The electrocardiogram in the diagnosis and management of patients with hypertrophic cardiomyopathy”. It is written by Finocchiaro et al. The authors discussed the current role of the ECG in the diagnosis and management of hypertrophic cardiomyopathy, focusing on various clinical settings in which appropriate use and interpretation of the ECG can make a difference.

Next up is a Hands-On article prepared by Gabriels et al, titled “When bigger is better: Novel use of a 27 F leadless pacemaker delivery sheath for femoral lead extractions”. The authors describe their experience with a novel technique involving use of the 27 French Micra delivery sheath as a femoral workstation for lead extraction.

This issue also includes 3 Heart Rhythm Society documents. The first one is the “2019 HRS/EHRA/APHRS/LAHRS expert consensus statement on catheter ablation of ventricular arrhythmias” authored by Cronin et al. This is the featured article for this issue. A comprehensive interview with the lead author, conducted by our online editor, Dr. Daniel Morin, can be found at the www.heartrhythmjournal.com website. A second document is written by Martinez et al, titled “Systematic review and meta-analysis of catheter ablation of ventricular tachycardia in ischemic heart disease”. This is followed by the third document titled “2019 HRS/EHRA/APHRS/LAHRS focused update to 2015 expert consensus statement on optimal implantable cardioverter- defibrillator programming and testing” by Stiles et al.